Click her to explore more about the conservation issues currently faced at Angkor, and how well its key features have been preserved. 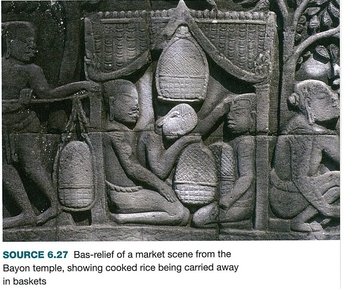 Wealth and rise to prominence
The Khmer empire was able to amass great wealth due to its ability to grow huge quantities of rice and its ready access to valuable raw materials. The Chinese Diplomat, Zhou Daguan recorded that when the king left his palace he was seen ‘standing on an elephant, the gold sword on his hand and the tusks f his elephant encased in gold. He had more than 20 white parasols decorated with gold.

Rice
The Khmer used systems of barter instead of money or gold. Due to its ability to grow huge amounts of rice meant that this was the basis of their economic system. Historians Estimate approximately 80% of the population involved growing rice.
Trade
Trades of produce other than rice were also an important part of the Khmer economy. Trade dominated by China, but evidence suggest they also traded with Champa and Siam and perhaps India. The empires main trade were raw materials, collected by hunters and foragers in the Khmer forest. Forest trade included Blue kingfisher feathers, elephant tusks, rhinoceros horns, bees wax, rosewood and cardamom which were all of high value and demand. 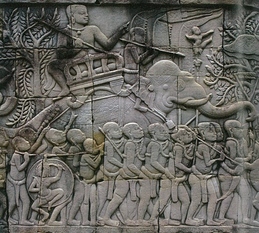 War and Warfare
The Khmer armies have been well documented throughout history, mainly on either bas-reliefs or steles at the temples at Angkor. Historians and archaeologists have then studied these in detail, being able to identify key aspects of Khmer warfare, with the general sense being they were good in different theatres of war.

Military Organisation
The Khmer took man of its ideas for warfare from the Indians, being well aware of Ancient Indian texts on warfare. The Indian military consisted of four corps: infantry, cavalry, chariots and elephants. However, the Khmer didn’t take all of these aspects into account, due to conditions in Cambodia at the time. Horses and chariots were used by the Khmer army, but evidence showed that this tactic was abandoned, most likely due to a lack of horses, as they had to be imported from China. Therefore, elephants were used as an alternative, because the were more widely available. Elephants were used by the Khmers as a war machine, with arrow- and spear-firing mechanisms strapped to their backs.

The main structure of the Khmer army which gave it its strength was its infantry, also, a self-developed idea of a navy was used by the Khmers, with temple carvingsshowing large open boats that were propelled by oarsmen, set on the Great Lake. The material of these boats is most likely to have been hollowed out rainforest trees, with the boats stretching to almost 20 metres in length. The boats had carvings of mythical beings, to probably scare the living daylights out of the enemy, and to boost morale of the Khmer people. No actual boats have survived to this day. 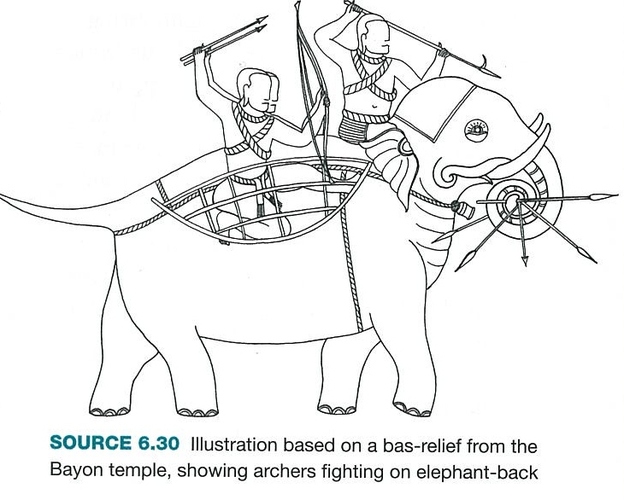 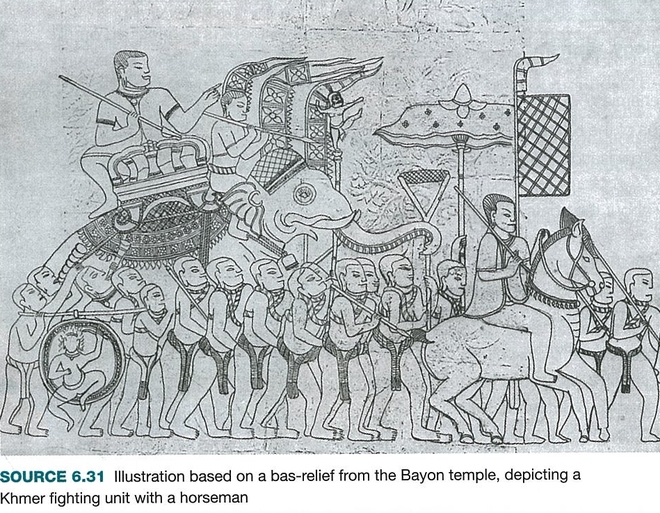 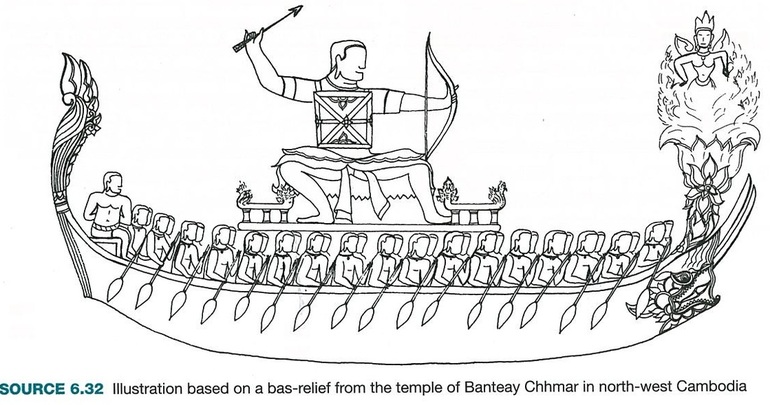 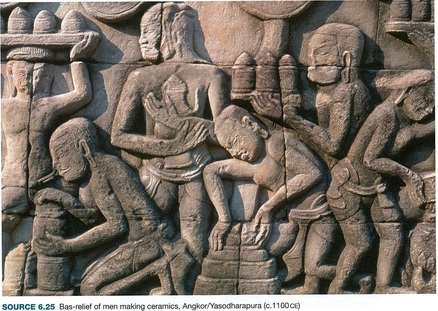 Khmer art
Stone sculptures
Not much is known about the tools the artists used to make the stone statues and we know none of the artists’ names. Statues usually to a long time due to the need to shape the stone blocks in a desired form, a difficult task is carving some Hindu gods as some have multiple arms. Once the statue was carved, a lot of effort was spent smoothing and polishing the stone. Most statues were religious and mythological creatures.


Metal work
A number of bronze statues have survived, though it is believed that most have been stolen or lost due to war or melted down. Zhou Daguan reported that gold and silver jewellery were common in Khmer society. Bronze objects found by archaeologists include hammocks, fans, parasols and litters. A fragment o statue was found near the West Baray in Angkor/Yasodharapura, ce.1936 which is believed to be a bronze statue of the Hindu god Vishnu. 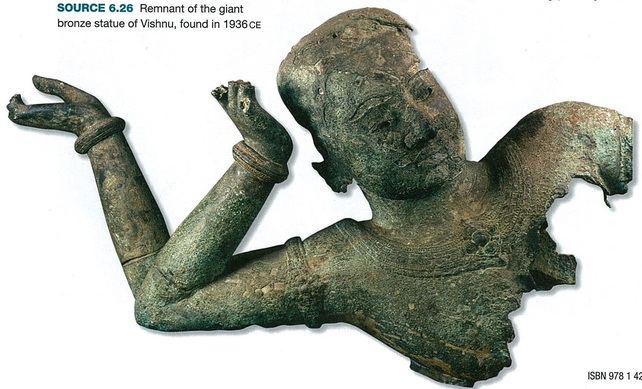 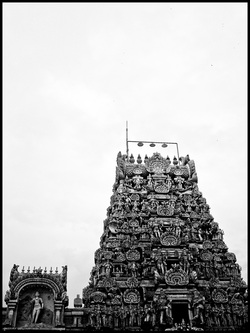 Indianisation
From the 1st century onwards, much of south-east Asia began to adopt Indian religious, political practices, combining them with their own local ideas. Historians refer to this process as "Indianisation" and have proposed many explanations of how and why these Indian ideas for introduced. Historian Michael Coe has identified the following elements of Indianisation that influenced the Khmer civilisation:
-The Hindu religion, its mythology and rituals
-The Sanskrit language
-The Indian writing system, stone inscriptions and palm-leaf books
-Hindu temple architecture/statues
-Cremation burials in upper classes
-Rectilinear town and city plans
-Artificial water systems 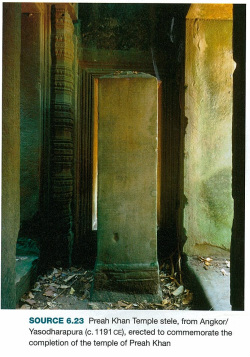 Religion
Religion played a particularly important role in Angkor. Before the arrival of Indian religious ideas, the Khmer worshipped ancestor spirits and nature spirits known as Neak Ta. Buddhism and Hinduism arrived in south-east Asia at the same time as the Indianisation process.
Hinduism
Hinduism is a polytheistic religion, but central to this was the worship of Trimurti, a trinity of the gods Brahma, Shiva and Vishnu. The religion emphasises the idea of dharma, whereby the order of the world is dominated by the balance of good and evil forces, between the gods (devas) and their demon enemies (asuras), and between the human world and the world of the gods. Hinduism also emphasises the concepts of samsara and karma, the combination of good and bad actions in a person's life. If someone wants to break out of the repeated cycle of reincarnation, a person must dedicate him or her to a life of poverty, chastity and meditation. The gods live on Mount Meru, a mythological mountain in the Himalayas, surrounded by seven seas.

Khmer Gods and Goddesses
The Devaraja Cult
When Jayavarman was proclaimed maharajadhiraja (King of Kings) at his coronation in 802, the Devaraja was also crowned 'Kings of the Gods'. Claude Jacques has shown that just as Jayavarman united the Khmer people politically under his authority, so too the Devaraja Cult brought spiritual unity to the empire, uniting all the old regional Khmer gods under one supreme god. Previously, these gods had protected their local rulers; now, under the Devaraja, they would collectively protect the "Great King of Kings'. The king was closely associated with the cult, and as the capital moved, so did the cult shrine. No images of the Devaraja have survived. 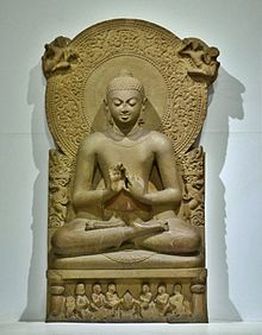 Buddhism
The historical Buddha, Siddhartha Gautama, was born in c.4080 BC, being the son of a Northern Indian King. He followed tradition, but at the age of 29, while taking a chariot ride, he saw a poor elderly woman, a sick and a dead body, being shocked by the world he lived in as a result. This then motivated him to give people a way of not suffering, coming up with enlightenment. Enlightenment is the realisation of how suffering is caused, and how to avoid the process of samsara. He then spent the rest of his life preaching a message of compassion, humaneness and a desire to break the cycle of rebirth.
Two forms of Buddhism then developed; the older, stricter version called Theravada Buddhism, and the younger form called Mahayana Buddhism. An Avatar called Lokeshvara, the Buddha of Compassion, was the most widely worshipped. Despite Jayavarman VII's support for Mahayana Buddhism, it did not remain the state religion, and by the 14th century, Theravada Buddhism became the state religion, and remains as it today in Cambodia.

Worshipping the Gods
To the Khmer, gods controlled all aspects of life. Thus, they needed to consult the gods and seek the advice of the priests about everything. At first glance, Khmer temples such as Angkor Watt appear to be enormous, but this can be deceptive. Khmer temples were built to house the gods, and they only required sufficient space to shelter a statue.

In the shrines, the gods were treated like royalty by their servants, the priests. The priests were responsible for waking the god, then washing, dressing and feeding them daily. The food was symbolically eaten by the god and then distributed to the priests. People could come and request help from the gods when the shrine doors were open.

In an attempt to improve one's karma, and to break the cycle of samsara, people were motivated to make merit. This was the Buddhist idea that doing good works will earn enlightenment.