Water and Irrigation System at Angkor

Click the button below to watch a documentary on Angkor Watt, relatinfg to how important this irrigation system was. 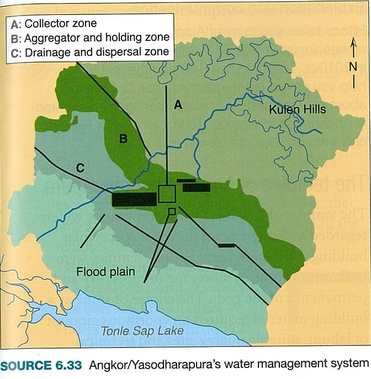 According to archaeologist Miriam Stark, water management was fundamental to the Khmer economy, allowing widespread settlement and farming throughout the Angkor region in Cambodia. The Angkorians were expert water engineers: they dug canals, dredged and straightened rivers, built dykes into floodplains to redirect and hold back floodwaters, dug moats around their temples and housing areas, and built reservoirs to hold water.

Many of the Kings of the Khmer Empire insisted on building barays, a large artificial body of water surrounded by banks of earth, which resembles an enormous reservoir. An example of this is the West Baray, which measures 8 kilometres by 22 kilometres wide. This system of barays functioned to prevent flooding from the monsoonal rains and to enable continued irrigation of rice paddies throughout the year. It was remarkably effective, an reliable, as some archaeologists believed it kept the Khmer Empire sustained in times of political instability.

Despite this evidence, many historians are divided on how the actual water system worked. For many years, it was argued that Angkor's agriculture relied on barays. However, recently, archaeologists have suggested that the Angkorians relied on rain and the regular flooding of the Tonle Sap.

Given the scale of the water engineering at Angkor, it might be assumed that it was centrally controlled, but no evidence has been found to explain how the water system was organised and maintained.

Methods that were believed to be used by the Angkorians to cope with heavy monsoonal rains included the building of their houses on stilts or mounds. Angkorians also dug trapeangs (small water storage ponds), being able to use water in the dry season and store water in the monsoonal season.