Everday Life in the Khmer Empire

Below is information about how people lived in the Khmer Empire. Click the link below to experience more of how they lived by becoming a tourist of Angkor Watt. 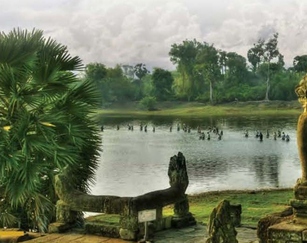 Source L.1- The water storage outside the Angkor Watt temple
Many Ancient Empires relied on the establishment of secure food supplies, and in the Khmer Empire, fish and rice were at the heart of food resources. Rice production was very important in the expansion and maintenance of the Khmer Empire. The Khmers created a HYDRAULIC SOCIETY to control the water supply from rainfall to their rice crops, as well as the RETREAT METHOD. They constructed dams, reservoirs, and irrigation canals around the Tonle Sap to collect water during the wet season, when there was a lot of rain. In the dry season, however, the shortage of a good water supply made it very difficult to grow big quantities of rice. The simple solution was to release stored water into rice fields, in order to support a constantly growing population.
Historians and archaeologists are in constant disagreement about how the Angkorian grew so much rice, especially in the dry season. There exists a possibility that the barays they constructed were used for agriculture as well. Recently, satellite mapping has discovered a system of old canals and waterways from the barays torice fields. This creates a good argument for the use of barays for growing rice.

Source L.2- Extract from "The Customs of Cambodia" (1296-97 CE) by Zhou Daguan
"In general crops can be harvested three or four times a year… For six months the land had no rain at all… The high water mark around the Freshwater Seas (Tonle Sap Lake) can reach some 70 or 80 feet (21 or 24 metres), completely submerging even very tall trees except for the tips. Families living by the shore all move to the far side of the hills. " 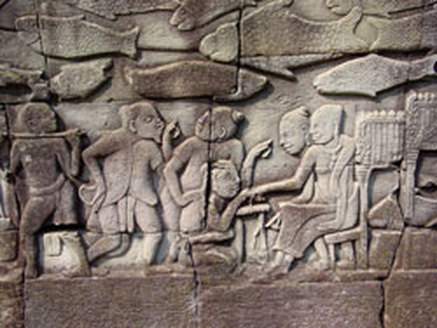 Source L.3- A scene from the side of The Bayon, which shows the typical clothing of the Khmers
Source L.4- Chinese diplomat Zhou Daguan's description of Khmer Clothing, from his book, The Customs of Cambodia
"...from the king down, the men and women all wear their hair wound up in top-knots, and go naked to the waist, wrapped only in a cloth"

Source L.4 is extremely useful in describing Khmer clothing of the era. Daguan said that the cloth was woven, and produced locally, but more elegant clothes, were imported, claiming they came from Siam, Champa, and from the 'Western Seas', which could mean India or Malay. This source could be seen as extremely reliable, as it is the only written primary source referring to Khmer clothing, and the descriptions are very accurate compared to the scenes of reliefs at The Bayon and Angkor Watt. 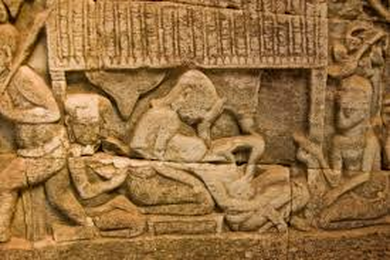 Source L.5- An example of a medical scene in a carving at Angkor, depicting childbirth
There are very few sources detailing health and sickness in the Khmer Empire, which restricts our understanding of such medical treatments they undertook. Zhou Daguan does however described how illnesses were treated in his book, The Customs of Cambodia.

Source L.6- Zhou Daguan's description of some of the health problems faced and how they treated them. From 'The Customs of Cambodia', written between 1297 and 1312 and published by 'The Siam Society' in  1993.

"The people of Cambodia often cure themselves of many illnesses by plunging into water and washing the head again and again. Nevertheless, the traveller meets many lepers along the way. Even when these unfortunates sleep and eat among their fellow-countrymen, no protest is made. By some it is said the leprosy is the outcome of climatic conditions. Even one of the sovereigns (kings) fell victim to the disease, and so the people do not look on it as a disgrace… As in our country, drugs can be  brought in the market; of these, with their strange names, I have no knowledge. There are also sorcerers who practise their arts on the Cambodians. How utterly absurd!"

From other sources we learn that some Khmer Kings developed systems of healthcare. There were over 100 hospitals and 101 rest houses along Cambodia's main roads.

Source L.7- An inscription on a wall of a hospital built by Jayavarman VII, explaining why he built it. From 'A History of Cambodia' by D.P Chandler, 1993.
"Filled with a deep sympathy for the good of the world, the king swore his oath: All the beings who are plunged in the ocean of existence, may I draw them out by virtue of this good work. And may the kings of Cambodia who come after me, attached to goodness… attain with their wives, dignitaries and friends the place of deliverance where there is no more illness."

As a whole, sources L.6 and L.7 , are extremely useful in informing us about health and sickness during the Ancient Khmer times. Together, they create an image of how life would have been living in the Khmer Empire and how illnesses were  treated, and how the kings organised care and help for their people, showing their particular significance. Source H.1 however, can not be considered as reliable as source H.2, since it has a biased opinion that the treatment methods were "absurd" which decreases the reliability of the entire source. 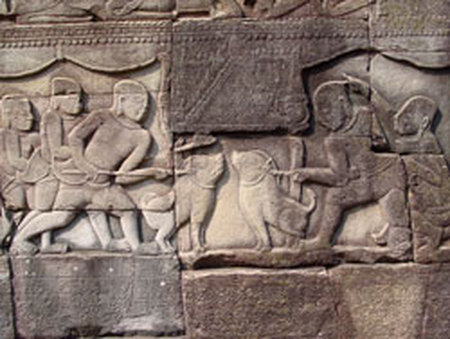 Source L.8- Bas-relief at the Bayon Temple, showing men preparing boars for a fight (c.1200CE)
The Khmer Empire was punctuated by many games and festivals. Every four months a festival would be held and in the final month of the year, they played competitive ball games. At these festivals, Angkorians witnessed firework displays, dancing, wild-boar fights and royal reviews. Every year in September, a census would be held. The entire population of the kingdom had to come to the capital to be reviewed before the royal palace and counted.

Dancers and music were a central source of amusement in the Khmer Empire. Temples had dance troupes and musicians; these people preformed at ritualss and for entertainment. Many of the temples however have carvings of Apsaras, who were celestial dancers. In cosmological Hindi beliefs, Apsaras were "created from the foam that was produced in the churning of the sea of milk when Earth was created." (from Pearson- History 8 for NSW: The Ancient to Modern World, Chapter 6- The Khmer Empire (c.802CE-c.1431CE) ) 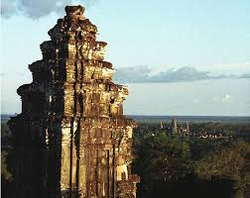 A vast network of highways were constructed to link Angkor to different provinces. These highways were usually raised above the flood level to up to 25 metres in width. They acted like dykes, diverting water into the surrounding fields.
Laterite bridges, up to 160 metres long, enabled highways to cross rivers. At regular intervals along the highways, kings built 121 identical 'Houses of Fire', which are believed to have served as rest stops.

Source L.11- A digital reconstruction of what life was like in the Khmer Empire