Rise and Fall of the Khmer Empire

To learn more about the legacies of the Khmer Empire, click the link below.

Legacies of the Khmer Empire

According to the Sdok Kak Thom stele, Jayavarman II was crowned chakravartin of the Khmer Empire in 802, uniting all the smaller Khmer states under his authority. However, the area had already witnessed the development of a couple of earlier states that shared many characteristics with the later Khmer Empire, such as Funan and Zhenla. The period before 802 is called the Pre-Angkorian Era. From the 1st century onwards, much of south-east Asia began to adopt Indian influences.
Chinese documents indicate that during the 1st century, major sea trade routes developed between China and India., via south-east Asia. As a result, the people of south-east Asia became involved in trade along the way. Along the trade routes, ports soon developed to cater for the needs of the merchants, bringing great wealth to the region.

﻿Funan﻿
According to Nan Qi Shu, Funan, which was located in the Mekong Delta region, became an important trading power on the trade route between China and India during the period 100-550: 'The Funan market is the meeting place of between eats and west … as Funan offers a place of passage from one ocean to another.'
Archaeological excavations at Oc Eo, a site in Vietnam, reveal evidence of an important port, being called south-east Asia's 'first great cosmopolitan trading city.' Numerous artefacts have been excavated at Oc Eo, including gold medallions of the Roman Emperor Antonius Pius (c.152), iron from the Philippines and mirrors from China, hinting at goods received from around the world. Indian inscribed seal stones and Buddhist and Hindu statues demonstrate influence of Indian religion and culture upon the Mekong Delta region.

Zhenla
As Funan began to decline and the economy began to shift from trade to agriculture, the territory to the north of Funan, called Zhenla began to prosper. Stone inscriptions indicate that the area was not united as a single country but was ruled by a number of regional leaders. Ishanavarman I of Sambor Prei Kuk then managed to bring Funan, and much of the area covered by modern-day Cambodia, under control. His great-grandson, Jayavarman I, continued to expand the kingdom, controlling a large bureaucracy. However, after the kingdom broke up into smaller competing states, the Khmer Empire then came into existence under the unification of these states. 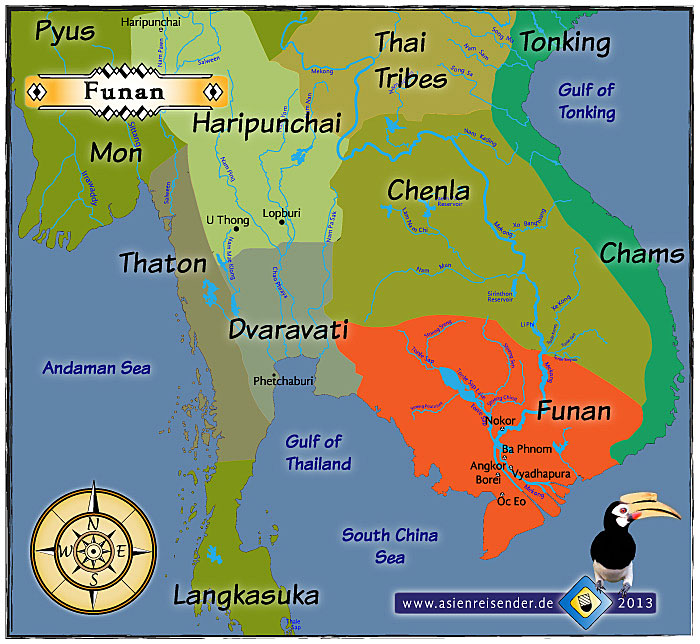 Map of the Funan area covered

The Rise of Angkor

God Kings
When Jayavarman II came to power in 802 AD, he further strengthened the power of the Khmer monarchy. He had declared himself a Devaraja, or god-king, in a ceremony performed by Hindu high priests. This meant that his authority to rule came from a divine source and that he himself was a god living on the Earth.
The Seat of Power
Jayavarman II is recognised as the founder of the Khmer Empire. During his rule, he established a new capital at Mount Kulen in north-western Cambodia. Mount Kulen was regarded as sacred and Jayavarman II ordered the construction of a three-tiered temple on the mountain. Jayavarman II appointed a high priest and ordered that only the descendants of the family of his high priest were able to become high priests in the future. While we do not have reliable written records of the actions that Jayavarman II took to expand the Khmer Empire, we do know that after his death, the extent of the empire was quite large. As Jayavarman II's power grew, he felt increasingl secure and moved his capital city from Mount Kulen to Hariharalaya, near the great inland lake, Tonle Sap. 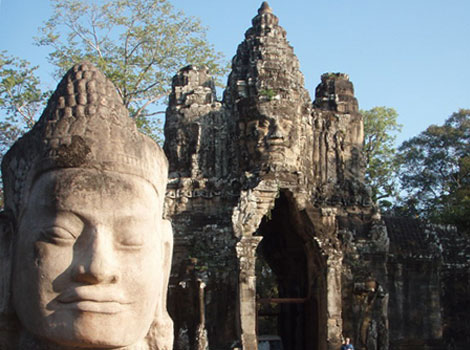 A temple constructed showing the face of Jayavarman II

Theories Behind the Fall of Angkor

Following the Death of Jayavarman VII, the Khmer Empire began to decline. Many theories have been proposed to explain the fall of the Empire. 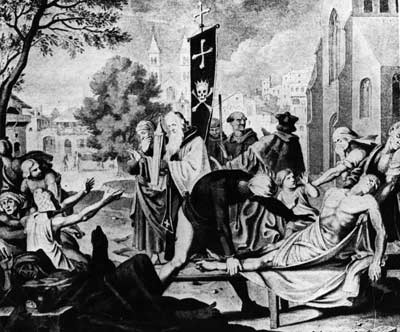 An image of people suffering from the black death