Click here to learn more about the temples of Angkor/Yasodharapura, and their connections to Khmer Kings. 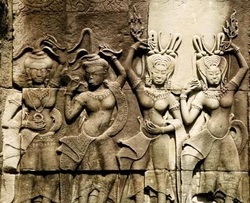 The head of the Khmer State was the king. In the usual western world, the preference for the successor of the current king is his eldest male son, no matter who the mother. In ancient Cambodian times this was not the case however. Successors to the throne could either be a male or a female, and could move along one generation until they all passed away. This however, made for a very unstable system. When a king died, there would be very bloody and dangerous battles to decide who would take the throne. However, this system was good in it delivered kings with potentials to fight, organise and to convince others who should be the next king. 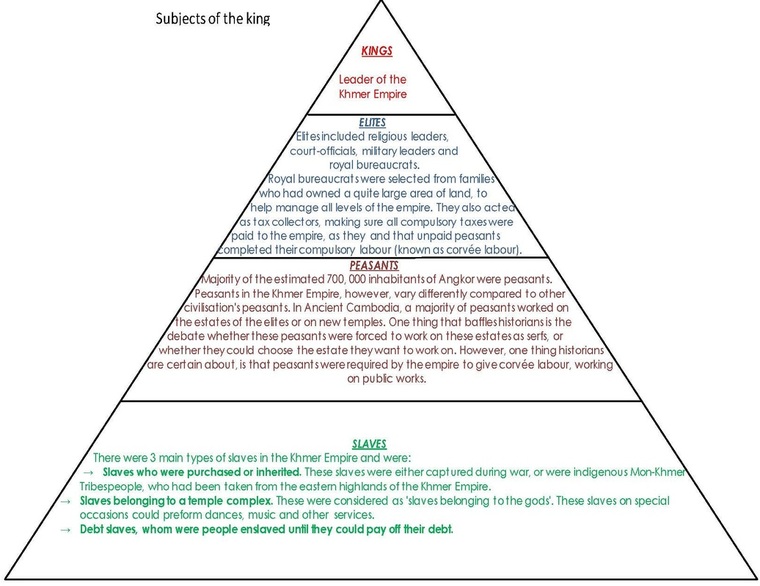 ﻿This pyramid hierachy shows the level of people in the Khmer Empire, and who contained power. It is important to consider all aspects of the Khmer People when studying them.﻿
Source S.1-  ﻿Zhou Daguan's view of slavery in the Khmer Empire﻿
'Most families have 100 or more of them [slaves], a few have 10 or 20; only the poorest have none at all'.

Source S.2-  Extract from The Customs of Cambodia(1296-97 CE) by Zhou Daguan
If they have committed some misdemeanour, they bow their heads and take the blows without daring to make the least movement. If a slave should run away and be captures, a blue mark would be tattooed on his face; moreover, an iron collar would be fitted to his neck, or shackles to his arms or legs.

Key Achievements of the Kings of the Khmer 'classical period'

The following table is about the several achievements of notable Kings of the Khmer Empire during the 'Classical Period'; 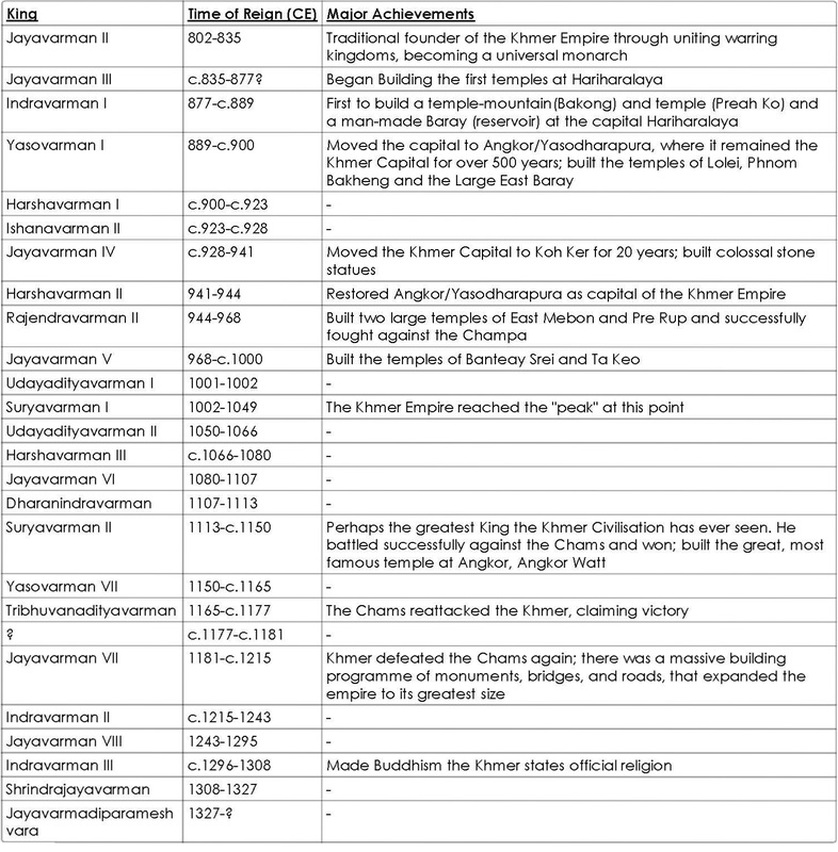 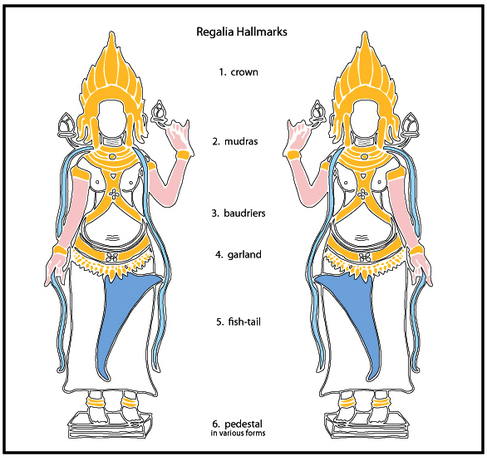 The king often had more than one wife, but his most important wife was called agramahishi (queen consort). The agramahishi had considerable influence over the Angkorian court, particularly if one of her son's were appointed yuvaraja (crown prince). If the king died, usurpers (one who illegally becomes king) often tried to marry the queen consort, to help legitimise their claim to the throne. Also, if the king died and had a very young son, the regent (a person appointed to reign on behalf of an under-age ruler, until they are old enough to rule in their own right) was appointed from the queen consort's family. Occasionally, kings emphasised their mother's ancestry, because it would usually be more prestigious then their father's, or the previous kings'.
Case Study: Queen Jayarajadevi and Queen Indradevi
Queen Jayarajadevi was Jayavarman VII's first agramahishiand, according to a eulogy composed by her sister Indradevi, Jayarajadevi married Jayavarman while he was still a prince. During the early years of heir marriage they were often separated, and so Jayarajadevi spent a lot of time fasting and in prayer, hoping for his return. Her sister Indradevi encouraged her to study the Buddha's teachings. When Jayavarman eventually returned to Angkor as the victorious king, she decided to donate all of her wealth to the gods and the poor. Unfortunately, she wasn’t queen for long, as Indradevi's dedication states that 'despite her eternal loyalty to her husband, soon after her master was invested as king she entered nirvana'. Jayavarman then married Indradevi, supposedly as an attempt to ease the 'fire of pain that was burning in the world'. Both Jayarajadevi and Indradevi are believed to have influenced Jayavarman greatly, especially when it came to his religious ideas.